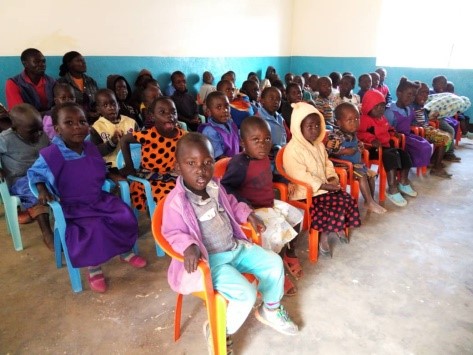 Chisansu CBCC was birthed as a response to the closure of a nursery school which was owned by a CBO. People in the village saw the impact of the former nursery school on children in primary school. The church decided to start a new nursery school in their church building The CBCC started in (insert year) with two caregivers and (insert figure) children

The closure of the first nursery school led to many children in the area and surrounding to be at home until they reach the age for primary school. This led to many children flocking to the newly opened learning center. Being the only center within that radius, other children had to be walking a long distance to get to school. The church is not located in the middle of the village. The number of children also grew as time went by and the church became small. The caregivers which volunteered were not trained.

Response to the Needs by the Church

The church approached TDI with a proposal for a modern CBCC to which TDI came through in 2018.The church identified land where the CBCC was to be constructed. Meanwhile the church moved the children from learning inside the church to a building considered fairly central for children from all directions. The church formed a CBCC committee to undergo training and identified four caregivers to undergo training. The church also provided construction materials such as quarry stone, hardwood, and sand. Members of the church also gave their man power in clearing the land and doing the landscaping.

In 2018 TDI responded to the needs highlighted by Chisansu AIC church in regard to having a modern CBCC with well-trained caregivers.

TDI in partnership with the church contributed the following to the cause:

Impact as at Now